Thanks to our Director Alison Ramcharran for outlining her experience of using our new rye flour in her ‘nano-bakery’, where her seeded rye sourdough is gaining a local fan club.

If you’ve never done it before, baking with freshly milled flour is a new and sensory experience.

The joy of opening a bag of just-milled flour and sniffing its aroma is not one I had experienced before I joined Scotland The Bread. So I was particularly excited to pick up the rye flour, which has an elegant provenance.

The rye grain that we are milling at the moment is from a highly diverse ‘evolutionary population’ developed by our friend and mentor Hans Larsson in Sweden over the past thirty years. It is called Fulltofta, the name of Hans’ farm in Skåne, Southern Sweden. Balcaskie, where our grains are grown and milled, grew it in 2018 and after another two cycles of adaptation to Fife soil and climate, we will be able to call it ‘Balcaskie Evolutionary Rye’.

Having been cleaned and prepped for milling, the rye flour has only just become available, and so it was very interesting to get hold of.

Here in Coldingham, I bake for friends and family, baking and selling around 15 to 20 loaves on a busy week. I’m described by the other STB Board members as a ‘nano-bakery’ – I don’t quite bake enough to qualify as a ‘micro-bakery’! My customers are very indulgent as they are happy for me to bake at random times, but most often I bake on a Friday, which works for everyone.

One of the most popular breads is a 100% rye seeded sourdough, made to the recipe below. Anecdotal evidence indicates that rye does not seem to annoy the gut in the way that wheat does for some people, and slowly fermented sourdough is particularly digestible. A loaf baked only with rye flour is also quite hard to get hold of. The addition of the pumpkin and sunflower seeds delivers a substantial, nutritious and filling slice of bread.

Mix all of the ingredients together into a soft dough at around 30°C. Using wet cupped hands to mould the dough into a shape to fit the tin (a high sided tin is best, about 1 litre in volume, 16 x 10 cm – available from our online shop).

Dip the dough into the bowl of seeds, rolling to pick up the seeds, and drop it gently into the bread tin. There is no need to press down as the dough will rise to fill the tin.

Once risen to the top of the tin (between two and four hours, depending on the ambient room temperature) bake for 10 minutes in a hot oven (250°C) and then finish off in a slower oven – around 180°C. The final bake can take around 45 minutes – do not hurry this wonderful loaf. The sides and bottom of the loaf should feel firm when it is taken from the tin. It slices better after 24 hours, and keeps well.

Mix together in a large bowl to give room for the fermentation activity, and leave in a warm place. The ideal temperature to fermenting rye is around 30°C.

Notes on baking with the new rye flour

As well as discovering the scent of newly milled flour, baking with the flour was so interesting. In a hint of what was to come, I found that the production sourdough fermented so much more quickly than with other rye flours I have used.

The proving was very fast and extremely vigorous. During my first attempts, it rose so fast that it flowed out of the tin, causing a crust which is in danger of breaking away from the loaf. It also went slightly ‘bubbly’ on the top, which left small gaps towards the top of the loaf, making it hard to slice.

I consulted Andrew Whitley and he recommended LESS water. So, when working with this flour, add enough water simply to bring the mixture together, and be careful not to make it too wet. For those of you used to baking with rye flour, adding water is not usually a problem, so I do recommend caution at this stage. It is a beautiful flour to work with, and I found the proving time to be about half of what I had become used to with other flours.

The unusual ‘bioactivity’ of our rye flour (i.e. how fast it ferments in a sourdough recipe) is probably due to the diverse genetics of the grain and the fact that it has a high content of naturally occurring maltose sugar. This is the result of difficult harvesting conditions in 2018 leading to a certain amount of ’sprouting’ in the grain which activated the amylase enzyme that turns starch into sugar. All of this aside, it produces a stunning loaf. 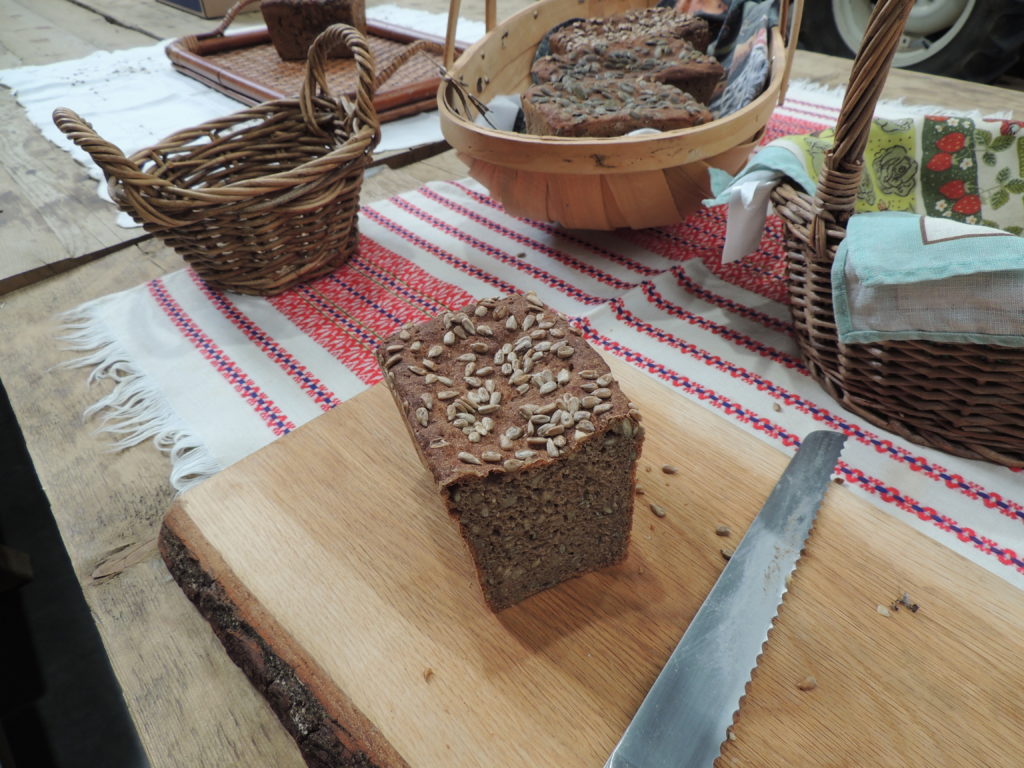