Home / About Scotland The Bread / Our story

Scotland The Bread is a collaborative project to establish a Scottish flour and bread supply that is healthy, equitable, locally controlled and sustainable.

Our idea is simple: grow nutritious wheat and bake it properly close to home. 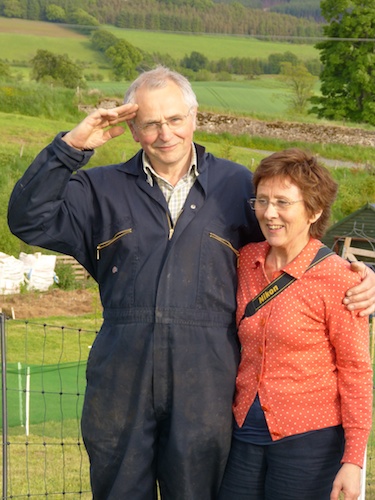 Scotland The Bread was founded in 2012 by Andrew Whitley and Veronica Burke, who had established their work at the forefront of the Real Bread movement in the UK.

Central to this new venture was the innovative and collaborative approach that had already been established through their work at Bread Matters Ltd to develop a more nutritious grain, flour and bread supply chain.

Working with scientists in leading institutions, they began to research heritage Scottish and Nordic wheats to find nutrient-rich varieties that do well in local conditions.

Bread For Good Community Benefit Society was formed in April 2016 to bring the project into community ownership and increase the scale of its activities for the common good. With support from Community Shares Scotland we launched a successful community share offer, which raised over £36,000. Achieving our target enabled us to access further financing through Just Growth, a programme created to support community based food and farming projects, and we secured additional match funding from the A Team Foundation through a successful crowdfunding campaign.

Bread for Good, trading as Scotland The Bread

In November 2017, we launched our first three fine wholemeal flours and began selling them online and from markets.

In the autumn of 2018, our milling and main operations moved from Macbiehill Farmhouse, Andrew and Veronica’s agroforestry farm in the Scottish Borders, to the Bowhouse on the Balcaskie Estate in Fife. The first crop of our organic grain was harvested from the estate that year, and we now had a base for our milling operation: the UK’s first Zentrofan mill was installed in September.

This is only the beginning

As our work has progressed, our aims have remained the same. Working together, we’ll change the entire system for the better: fair deals for local farmers growing nourishing food for people, fewer damaging food miles, more nutrition in every slice of bread and more jobs per loaf as the emphasis moves away from factory bread to community and home-bakers who can bring out the best in our local grains.

Find out more about our work in: