Rouge d’Ecosse wheat is, despite its French name, an old Scottish variety probably descended from the ancient British wheat Blood Red. It seems to have been given its French name (‘Red of Scotland’, literally) by the famous Paris grain merchant and wheat improver Henry de Vilmorin.

His 1880 publication ‘Les Meilleurs Blés‘ (The Best Wheats) catalogues over sixty wheats, each described in detail and accompanied by a high quality engraving.

According to Vilmorin, tradition has it that this grain came to Scotland ‘from the London grain markets’ (a source of wheats from all over the globe), which ‘leaves its true origins somewhat obscure’. At first confined to East Lothian, it was later grown ‘all over the country’. It had two outstanding characteristics: it was very resistant to lodging (when wheat falls over in the wind or rain); and it could tolerate great cold over the winter. Vilmorin says that, of all the foreign varieties, Rouge d’Ecosse and Hunter’s (another of our wheats) alone survived the very ‘rigorous’ winter of 1876-77 in Lorraine in Eastern France.

Rouge d’Ecosse likes a slightly hilly terrain and does well on land of medium fertility, making it suitable for organic cultivation without the application of artificial fertilisers.

Find recipes and baking advice to help you make the most of this exceptional flour here. 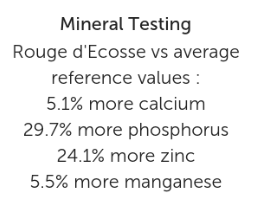