Hunter’s wheat has an interesting story. Sometime around 1810, a Mr Hunter of Tynefield, Dunbar, East Lothian, saw an unusually attractive stalk of wheat growing by the wayside on Coldingham Muir in Berwickshire. He picked a head (or ‘spike’) and sowed the seeds, selecting the best resulting plants for further propagation. Within a few years, Hunter’s wheat had become one of the most popular varieties in Scotland. In his magisterial 1860 work The wheat plant : its origin, culture, growth, development, composition, varieties, diseases, etc., etc. John Hancock Klippart of Ohio provides an account of Hunter’s wheat (‘one of the oldest and most esteemed varieties in Scotland’), including this significant observation:

“…it has been observed that while many of the newer and finer sorts of wheat look better in winter and in spring, Hunter will, year after year, bear comparison with them either in the sheaf, stack, sack, flour-mill or bakers’ shelf. It is a great favourite with millers and bakers…”

Klippart notes that this wheat has ‘stood its ground against many newer varieties which, although most prolific on their first introduction, have been found to deteriorate so much that their cultivation gradually lessened…’ He is alluding to Hunter’s wheat’s natural resilience, a characteristic that more than justifies its revival in an era when so many modern high-yielding varieties seem to last only a few years before their carefully arrived-at ‘resistances’ break down in the face of rapidly evolving fungal diseases or pests.

Henry de Vilmorin, in his 1880 Paris publication ‘Les Meilleurs Blés’, writes of Hunter’s wheat that, following its chance discovery, it spread quickly, not just through East Lothian and neighbouring counties but to England and ‘from there to France where it was appreciated not only on account of its high yield and grain quality, but above all for its remarkable hardiness which made it one of the least frost-susceptible of all the white wheats’. In the particularly cold winter of 1876-77 in Lorraine in Eastern France, when almost all ‘foreign’ varieties succumbed, only Hunter’s and Rouge d’Ecosse survived.

Vilmorin (somewhat at odds with Klippart) notes the light colour of this wheat’s bran. This is a feature of Scotland The Bread’s stock of this wheat which produce a noticeably lighter-coloured wholemeal flour than either Rouge d’Ecosse or Golden Drop. Bakers may find Hunter’s an attractive option for making cakes and pastries in which the flavour and nutritional benefits of wholemeal are real without being intimidating. 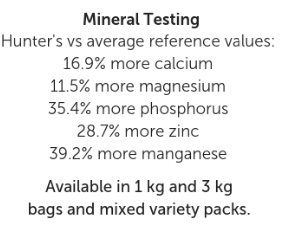