To celebrate the start of Real Bread Week (February 24 – March 4 2018), a number of our Soil to Slice groups gathered on Sunday 25 February at the Royal Botanic Garden Edinburgh’s Botanic Cottage to talk yields, baking inspiration, milling and new season sowing. 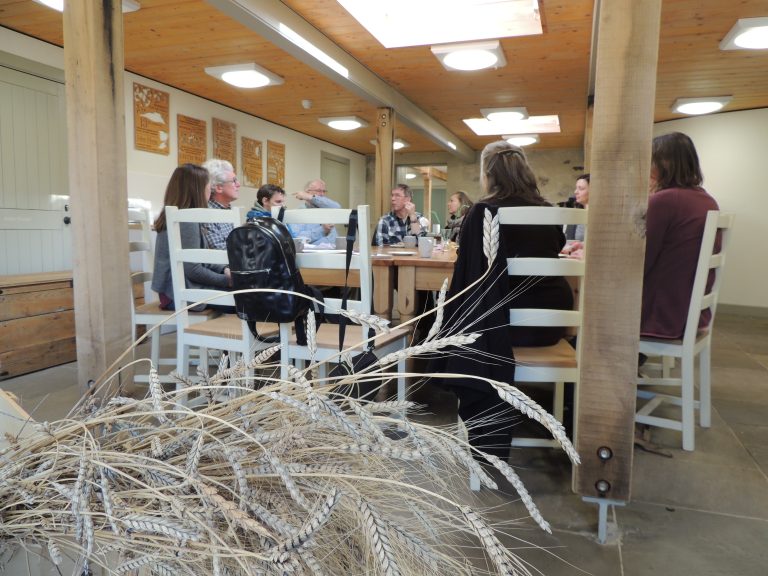 Hosted in partnership with the BigPicnic, both initiatives have at their heart a concern for food security: Soil to Slice projects are essential demonstrations of the impact of small-scale planting. On their own they couldn’t feed Scotland, but if just a sixth of the land currently devoted for wheat growing was used for bread wheat, Scotland’s organic flour supply would be secure. These plots are also hugely engaging for a public now almost entirely divorced from the production of one of our staple dietary ingredients, as these testimonies show.

A number of common themes arose from the groups’ presentations, from practical issues concerned with late planting and ideal grain storage conditions, to questions and suggestions over public engagement and ensuring the plots were effectively signposted. 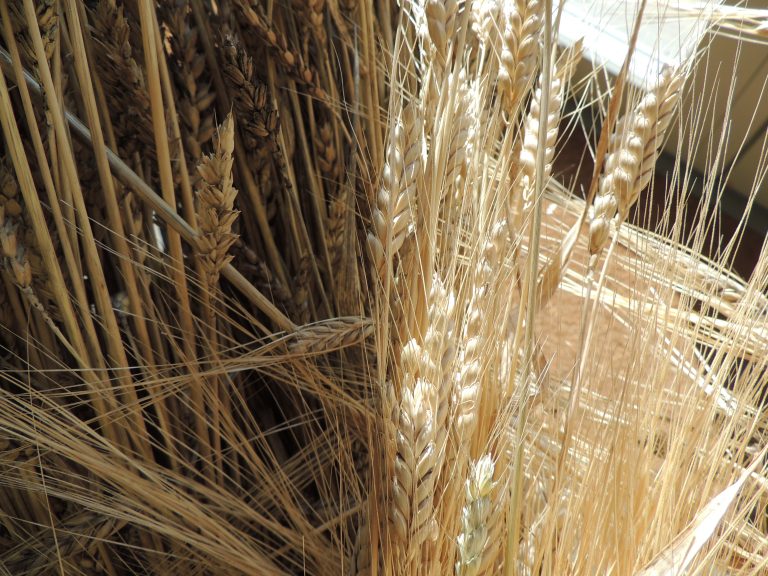 Tom Kirby, Granton Community Gardeners: ‘This project is slow motion community theatre that changes the way people think about the land. Walking down the street with bundles of straw, cars slow down as they pass us; people stop to ask what we’re doing.’

GCG’s first year’s yield in 2016 was the equivalent of 4.2 tonnes/hectare – a very good organic showing.

As well as the valuable flour, they have had lots of demand for the wheat straw. Commercially-grown wheat has very short straw which is, in any case, mangled in the combine harvester (and sometimes simply chopped and left on the ground), so getting hold of long straight stalks for making beehives and baskets is hard. A circular economy is growing up: lend a hand with growing the wheat in return for some straw.

GCG are currently waiting for a new, larger wheat plot to become available, hopefully in time to sow spring wheat. 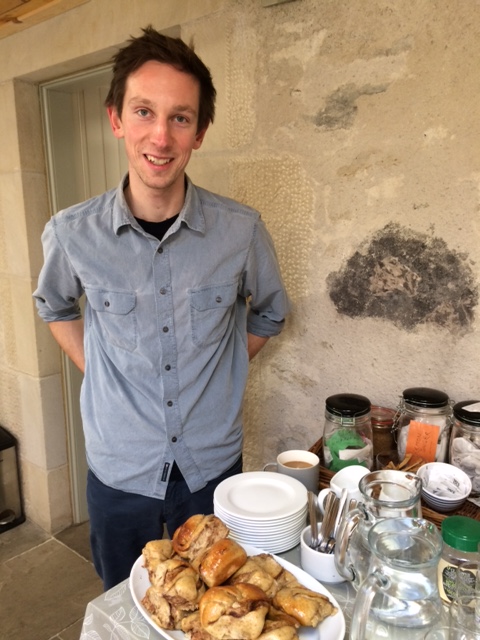 Suggestions arose for skills sharing and future activities: a scything workshop for Soil to Slice participants with demonstration for the general public; sharing the bicycle-powered mill that GCG successfully used with their first harvest; shared baking sessions, equipment and potentially storage facilities; school engagement on the citizen science side of the projects.

Andy Crofts, the Edible Gardening Project and the BigPicnic: ‘We get a huge number of visitors to our site at the RBGE, so plan to focus on the more experimental grains such as emmer, spelt and old oat varieties, buying in the three Scotland The Bread flour varieties for our baking. In 2017 we grew the seeds we saved from our first crop of Swedish white and brown, as well as emmer, spelt and barley. People loved the threshing day: one of the major positives of Soil to Slice is that it has been really good for engaging the public.’ 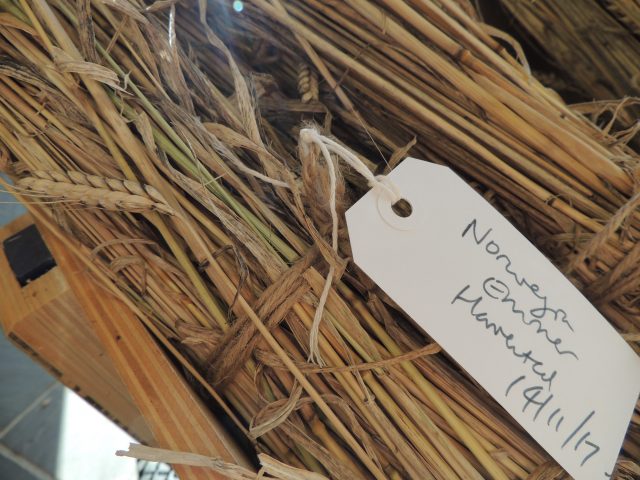 Andrew Whitley, co-founder of Scotland The Bread, covered some of the benefits of Soil to Slice’s return to traditional landraces, as well as organic and low-intensity growing methods: increased nutritional value of the resulting flour, as well as the potential for addressing the modern rise in intolerance to gluten. A selective, evolutionary breeding approach can address the loss of diversity in modern bread and farming: diversity as a broad concept, for the grain gene, as well as beneficial diversity in the bacterial qualities of the soil and the human. This can be summed up by a line from a talk Andrew gave in September 2016, Rediscovering Wheat Diversity for the Public Good: ‘A new approach is desperately needed, one which has human health as its goal, harmony with the biosphere as its operating principle and equity as its moral compass.’

The Cyrenians’ Soil to Slice plots can be found at the Royal Edinburgh Community Gardens, in the grounds of the Royal Edinburgh Hospital. After hearing about the project at the ‘Power of Food Festival’ AGM, delegates visited Macbiehill Agroforestry and quickly became very engaged. They grew their first wheat in the 2016-17 season and are just beginning to bake with the milled flour: an outdoor cob oven is very popular at these events, and has been used to bake sourdough loaves that individuals have made and proven at home, as well as cheese scones and sourdough pizza made with Scotland The Bread Rouge d’Ecosse wheat.

The Royal Edinburgh is a psychiatric hospital, and around the core team of Soil to Slice volunteers are a number of people coming to the project at transition points in their lives. The gathering heard of the difference the project has made to patients, even prompting engagement with long-term patients for whom interaction is particularly difficult. The sight of a traditional winnowing basket in use sparked a rare discussion with one patient, enabling a personal conversation to take place at a critical point. The garden is even becoming part of a cure for those who can’t make it outside: the team are increasingly making visits to wards within the hospital, with the long wheat straw an interesting jump-off point for discussion and crafts.

‘We were all very surprised at how tall the wheat was. Most of us engaged with the project are very new to horticulture, so to see wheat up close is quite a thing.’ Rachel Helms

Andrew gave a number of tips for using these heritage flours in baking: the key is to step away from the modern picture of a tall, uniform loaf and embrace liberated dough! Think ciabatta, baguettes, flatbreads, pizza and beautiful rounded loaves. Read more advice and find some tried-and-tested recipes here.

The newest group to join Soil to Slice is Friends of Granton Castle Walled Garden, who are about to sow Hunter’s and Rouge d’Ecosse wheats in their medieval walled garden. Having successfully campaigned for this slice of history to be saved from development, the volunteers at FGCWG are set to start work preserving horticultural heritage this season. Founder Kirsty Sutherland has previously grown Scotland The Bread’s historic wheats at Pilton Community Garden, and the plots will be an engaging talking point on the Friends’ ‘hidden gem’ monthly tours.

Gorgie City Farm sent an update in their absence, detailing six events based around their Soil to Slice project. These ranged from a community sowing event to drop-in sessions for pre-schoolers based on Julia Donaldson’s The Scarecrows’ Wedding, in which the children dressed scarecrows made at a previous event and harvested wheat. Thirteen harvest workshops saw 158 primary-aged school pupils help to harvest and mill wheat and make flatbreads; 35 nursery age pupils attended workshops focusing on the story of the Little Red Hen, in which they harvested wheat and milled it into flour; and a ‘Fork to Fork’ harvesting and cooking session was hosted for eight City Farm volunteers with special needs – the group harvested food  and wheat from the garden, and cooked and ate a meal together. 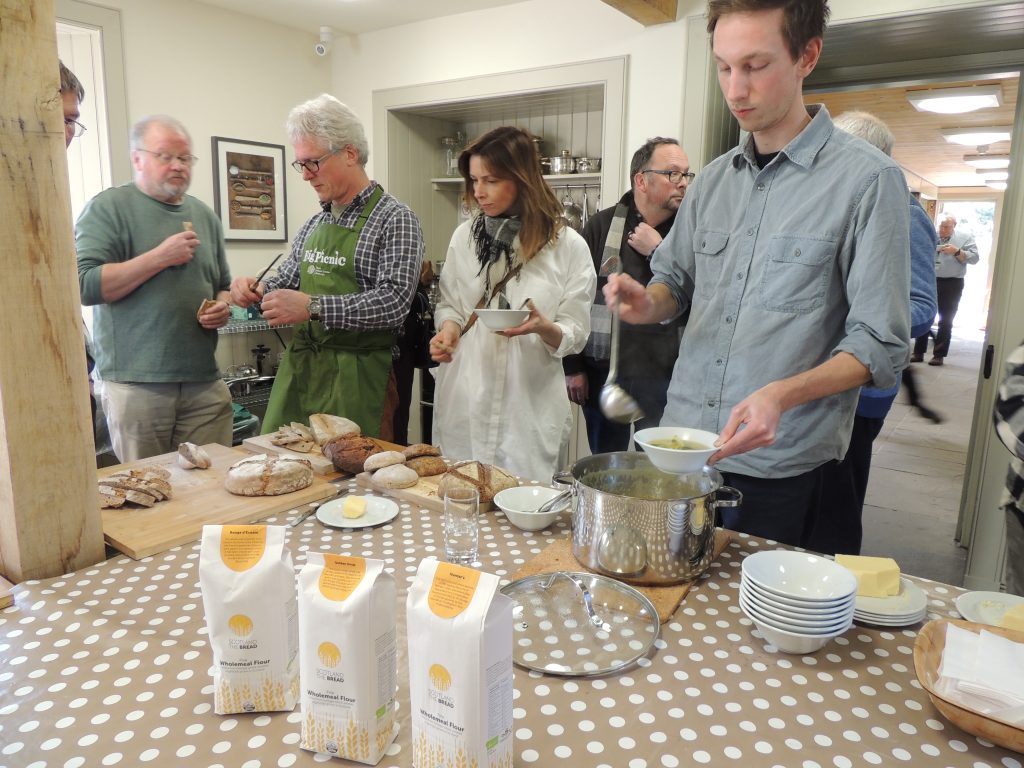