Created by ceramic artist Sigrid Hovmand on the island of Samsø, Denmark, the dome took its original shape from an artisan loaf at Skærtoft Mill.  Each dome is hand-thrown in stoneware clay, coloured with ochre and turned in one piece before being cut by hand and fired at 1300 C.

Scotland the Bread is pleased to be the only place in the UK where the baking domes made by gifted artist and studio potter Sigrid Hovmand may be bought. Our connection with Sigrid is both personal and professional. We met her at the annual bread festival organised by our friends at Skaertoft Mill in southern Denmark some years ago. We were so impressed by the delicious sourdough wholegrain bread baked in Sigrid’s domes at Skaertoft that we filled our car boot with them at the end of the festival and have been using and selling them ever since.

Each dome is a work of art, with subtle variations of colour and finish – proof, if it were needed, that these are the products of a true artisan. The precision with which each lid fits on its base (with a simple device to make sure it’s the right way round) suggests that the maker has mastered her craft to an impressive degree.

The larger dome will take about 2 kg of dough (a bit less if it’s a very light one) and the smaller one about 1 kg. Click on one to find out more about how they work.

With care, these domes should last for a long time.

Use and care of bread domes

The domes are designed to go into an ordinary domestic oven, where it creates the effect of a brick oven, producing a beautiful, rounded loaf with a crisp crust and moist crumb. Most of the baking aromas that normally drift round the kitchen so temptingly are trapped and concentrated in the crust, which tastes remarkably sweet and nutty.

Having fermented your dough up to the point where it would normally be put into a tin, you should shape it into a fairly tight cob and place it on the base of the dome which has been greased with a very small amount of olive oil (or similar). Sprinkling some oily seeds, such as sesame or linseed, onto the base of the dome adds a tasty and attractive finish as well as insuring that the baked loaf lifts out smoothly. Replace the lid and allow the bread to rise until it is about two-thirds proved.

The time this takes will depend on the type and temperature of the dough. Normally the signs are that the dough has flowed out to the edges of the dome and has begun to rise upwards a little. If you leave it proving for too long, the dough may rise up and touch the dome lid, making it hard to remove to inspect the state of the dough.

Put the dome in a cold oven. Turn it to 220°C and bake for 30 minutes. Reduce the temperature to 200°C and continue baking for another 45 minutes. Then remove the lid and, if necessary, bake for a further 5-10 minutes to complete a firm crust.

Another way to use the dome is to pre-heat it (with the lid on) in a hot oven for at least 30 minutes. Then turn your proved loaf, e.g. from a proving basket, onto the hot base, replace the lid and return the dome to the oven. Keep the oven at its hottest setting for 10 minutes and then reduce it by 20°C. Baking will probably take 40-50 minutes for a 2 kg dough piece. If using this method, it is easier to bake a smaller amount of dough, say 1-1.5 kg, in the dome. This allows a gap between the dome and the dough and a chance for some moisture to condense on the dough surface, thus developing a particularly crunchy crust.

The dome base may also be used by itself, pre-heated in a hot oven, as a pizza stone.

Caring for your dome

The dome requires little cleaning and using a clean dry brush is normally sufficient to clean it. If there is dough stuck to it, simply soak it in warm water before brushing it out and gently drying. 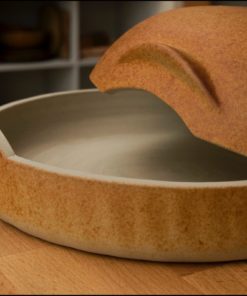 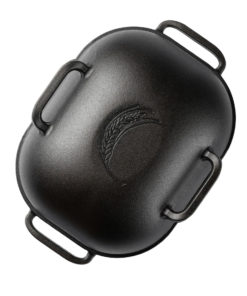